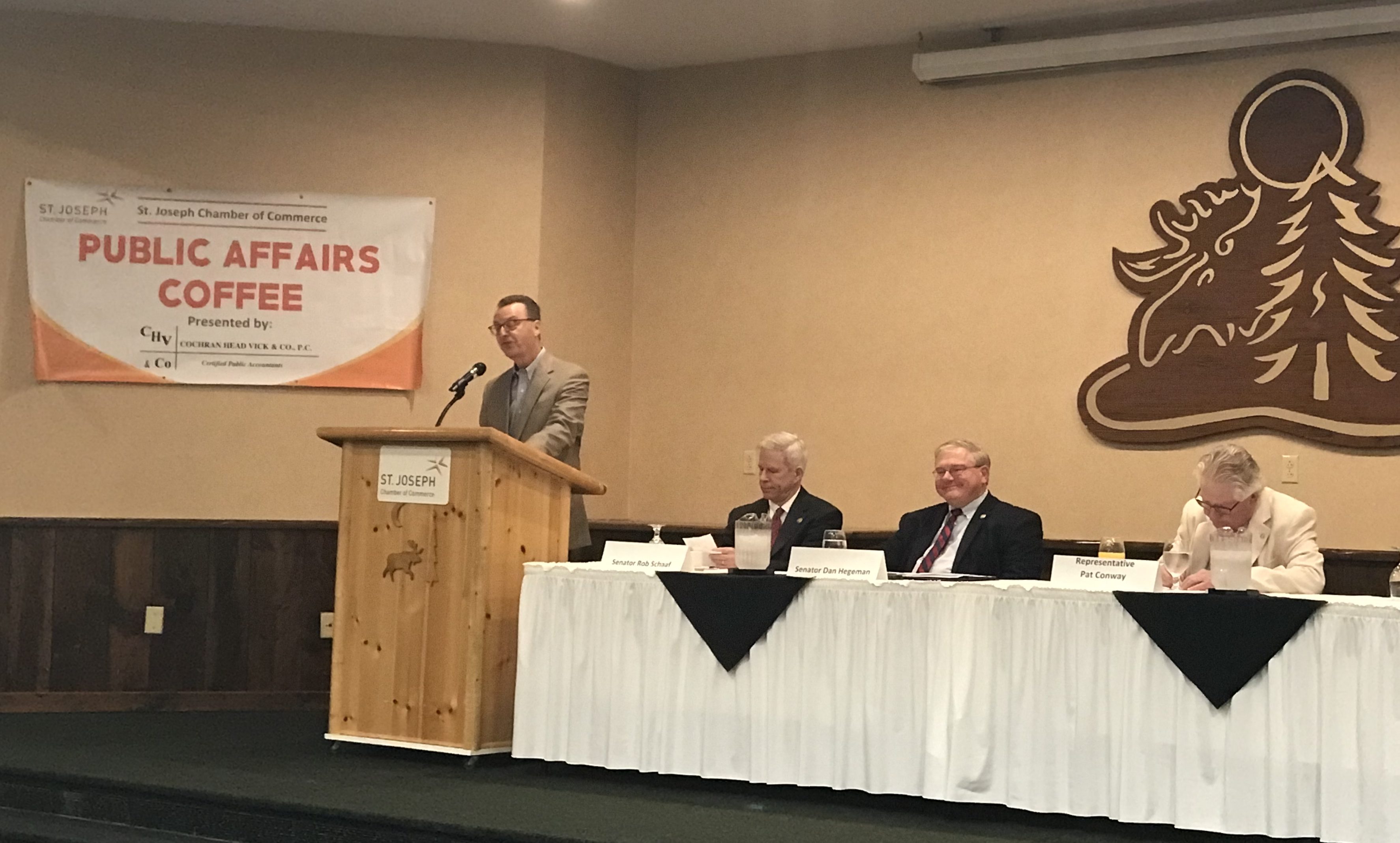 In what has become a tradition for the St. Joseph Chamber of Commerce, legislators from the state level were invited to speak at a Public Affairs Coffee to summarize the wins and losses of the legislative session. However, the event on June 8 was a little different than most because two of the speakers have reached their term limits.

Both Sen. Dr. Rob Schaaf and Rep. Pat Conway cannot run for re-election and were feeling the freedom that comes along without re-election stress and discussed the perks of things like never having to throw parade candy again.

“I feel like a soldier would feel about war,” Schaaf said. “I don’t have to go back.”

He said in his time in Jefferson City, he found it more important to stop bad legislation than to make lots of new laws.

Conway said that being in the minority party was consistently difficult in the House. He said of all the bills passed this session, only three were from Democrats and two of those, he thought, were naming bridges.

For the years to come he said, “I think we should try to centralize our line of thoughts so there’s more compromise. When there’s a super majority in both the House and Senate, things can happen too quickly. Government is supposed to move slowly for a reason.”

He said more thought and debate should go into legislation.

“There was an incredible amount of things passed on the last day,” he said.

Schaaf gave himself and the Legislature overall a D for the session. He said he didn’t get enough bad legislation stopped and he said the Legislature didn’t do enough for its real constituents, the people of Missouri.

“Ask yourself, are the elected officials protecting water, electric and phone companies, or the people?” he asked.

Sen. Dan Hegeman, who can run for office again, disagreed with Schaaf.

“I think we did a pretty good job,” he said.

He said they were able to restore funding for education, particularly higher education. He personally led the effort to cut historic tax credits, which wasn’t 100 percent supported by audience members. Previously, $140 million in tax credits were available. That number was reduced to $90 million, with an additional $30 million approved for enterprise zones, or projects in high-poverty areas.

“Historic tax credits are needed, but we have to compare them with other needs,” he said.

Hegeman said Missouri still has the most allocated to historic tax credits in the nation, with Ohio following in second place.

Conway offered a bit of solemn advice for those seeking office (many candidates were in attendance).

In the last eight years, he saw suicides of office holders and key staff, high-ranking officials have to step down and the governor being on the brink of impeachment.

“If you’re going to run for office, throw your phone away today,” he said.

Patt Lilly, president and CEO of the St. Joseph Chamber of Commerce, thanked the men for their time serving our state and thanked all the candidates in attendance for running for office. Statewide politics isn’t an easy job and St. Joseph is lucky to have such dedicated residents to take on the task, he said.

Reps. Delus Johnson and Galen Higdon, who have also reached their term limits and were unable to attend. Public Affairs Coffees are presented by Cochran, Head Vick & Co. P.C.